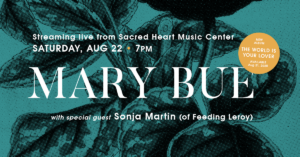 Supporting the show is Sonja Martin of Feeding Leroy!

The event will celebrate the release of her new album, “The World is Your Lover.” The performance will be broadcast on the Sacred Heart Music Center YouTube Channel and Facebook page.

“The World is Your Lover,” produced by the Suburbs’ Steve Price, is a synthesis of her seven-plus releases, merging pianos and guitars, spiritual longing, and real-world sorrow. The album will be officially released Aug. 21.

Not one to bow to popular music trends, Mary has stayed true to her own sound, evolving and about to emerge, butterfly-like, with support from her new band collaboration Mary Bue & the Monarchy (a nod to the precious pollinator that graces Minnesota summers) featuring Steve Price, Jeremy Ylvisaker, Richard Medek, Shannon Frid-Rubin, Julia Floberg, Molly Maher and Crystal Meisinger with special album guests Alan Sparhawk (Low), Adam Levy (The Honeydogs) and Stephan Kung (The Suburbs).

In January 2020, Mary traveled to Rishikesh, India at the base of the Himalaya (where the Beatles & Donovan studied with Maharishi Mahesh Yogi) to study Nada Yoga – the yoga of sound. Sanskrit mantras, lessons in harmonium, voice, and sitar (which she purchased and brought home, ha!), yoga asana, pranayama, meditation, and purification techniques were practiced to invite a pure vessel for deeper experiencing & creation of sound.

A prolific songwriter, Mary’s music touches upon archetypal themes of the human condition: love, loss, triumph, dreams, and the natural world. A longtime student of yoga and psychology since her early teens, Mary weaves sacred subject matter into her songs, seeking of deeper levels of consciousness, and deep concern for the environment mixed into her sometimes crass, real-world hue. She released The Majesty of Beasts in May 2017 which landed on 2017’s Best of Minnesota Music lists for the Minneapolis Star Tribune and #3 in the City Pages annual ranking. Mary’s long-time support of PAVSA (Program for Aid to Victims of Sexual Assault) as well as the release of this EP was also recognized, honoring Mary with 2017 Community Ally of the Year.

Sonja Martin is a Duluth musician. She plays in a folk foursome called Feeding Leroy. Sonja has been a par to the Duluth music scene for over 15 years and she is continually inspired by the people and nature around her. Sonja has been writing songs and performing more as a solo or duo act, alongside fellow Duluth musicians such as Lee Martin, Clancy Ward and Nate Hynum.