“If intimacy intrigues you and makes you into a skittish peeping tom,  then be sure to catch Bue at her next performance.” – Alan Sparhawk,  Low

Mary Bue is a songwriter, Nada yogi, traveler, runner, vegan, retreat guide, music + yoga teacher based out of Minneapolis, often roaming this beautiful world. Her newest album The World is Your Lover (release date August 21st 2020, produced by the Suburbs’ Steve Price) is a synthesis of her seven-plus releases, merging pianos and guitars, spiritual longing, and real-world sorrow. Her previous albums achingly express life in melancholy piano-poems, yet in 2015 Mary risked a genre switch to aggressive electric guitars, concise lyricism, and a nod to to 90’s grunge.

Not one to bow to popular music trends, Mary has stayed true to her own sound, evolving and about to emerge, butterfly-like, with support from her new band collaboration Mary Bue & the Monarchy (a nod to the precious pollinator that graces Minnesota summers) feat. Steve Price, Jeremy Ylvisaker, Richard Medek, Shannon Frid-Rubin, Julia Floberg, Molly Maher and Crystal Meisinger with special album guests Alan Sparhawk (Low), Adam Levy (The Honeydogs) and Stephan Kung (The Suburbs).

In January 2020, Mary traveled to Rishikesh, India at the base of the Himalaya (where the Beatles & Donovan studied with Maharishi Mahesh Yogi) to study Nada Yoga – the yoga of sound. Sanskrit mantras, lessons in harmonium, voice,  and sitar (which she purchased and brought home, ha!), yoga asana, pranayama, meditation, and purification techniques were practiced to invite a pure vessel for deeper experiencing & creation of sound.

A prolific songwriter, Mary’s music touches upon archetypal themes of the human condition: love, loss, triumph, dreams,  and the natural world. A longtime student of yoga and psychology since her early teens, Mary weaves sacred subject matter into her songs, seeking of deeper levels of consciousness, and deep concern for the environment mixed into her sometimes crass, real-world hue.  She released The Majesty of Beasts in May 2017 which landed on 2017’s Best of Minnesota Music lists for the Minneapolis Star Tribune and #3 in the City Pages. Mary’s long-time support of PAVSA (Program for Aid to Victims of Sexual Assault) as well as the release of this EP was also recognized, honoring Mary with 2017 Community Ally of the Year.

“There is a curious power in the ability to view one’s life with an unjaundiced eye. It’s not about being fearless, although that doesn’t hurt, it’s about the ferocity of spirit required to accept the world as it is and move forward from there. Singer/songwriter Mary Bue’s songs crackle with this power, mixing piano and guitar, folk and pop, and redolent with private tragedy and shared elation. Her voice, described as “marvelously sultry and cool,” lends her vivid, sometimes existential lyrics a texture that is both intimate and expansive.  This intimacy is Mary’s calling card. Her lyrics invite you in and you’re right there with her as she sings, barefoot in the sand or walking along the Mississippi, heart pounding from your chest, letting go, hanging on, vibrant, alive. She brings you into her adventures, trials, and triumphs through her lyrics, and keeps you engaged with melodies you’ll find yourself humming to yourself long after the music has ended.” – Aaron Richner

Mary describes her own 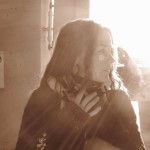 work as the retellings of adventures, mishaps, and pains-in-the-ass. Which is simply to say that through her experiences touring the country, studying yoga from in Seattle, attaining a Bachelors degree in psychology and falling in and out of love, she has a lot of wisdom to retell. The songs are a map she has drawn through the depths of the ocean of human experience; and even though the lyrics are often pulled from secret, dark places, Mary’s presence is a positive one, full of laughter and light. – Amy Clark, KAXE

In 2014, Mary was awarded a career development grant from Arrowhead Regional Arts Council (ARAC) with the proposal to stretch & challenge her skills and release an album on her second instrument, the guitar (piano being her first instrument).  The result was 2015’s  “Holy Bones” deemed “Highly recommended” by the Minneapolis Star Tribune. Also in 2014, Mary won a full day of recording at Nashville’s Welcome to 1979 Studio.  In 2016 she cashed in on that prize and recorded “Majesty of Beasts” a four song EP released on vinyl in January 2017.  Amidst all of the music stuff,  a few years of touring + gigging full time,  Mary moved to Minneapolis in May 2016 to open a yoga studio – Imbue Yoga which saved her life in many ways but she ultimately decided to close to persue her music passions,  teach yoga for the love of teaching,  and expand her music lesson offerings (beginning piano,  guitar,  and ukulele).