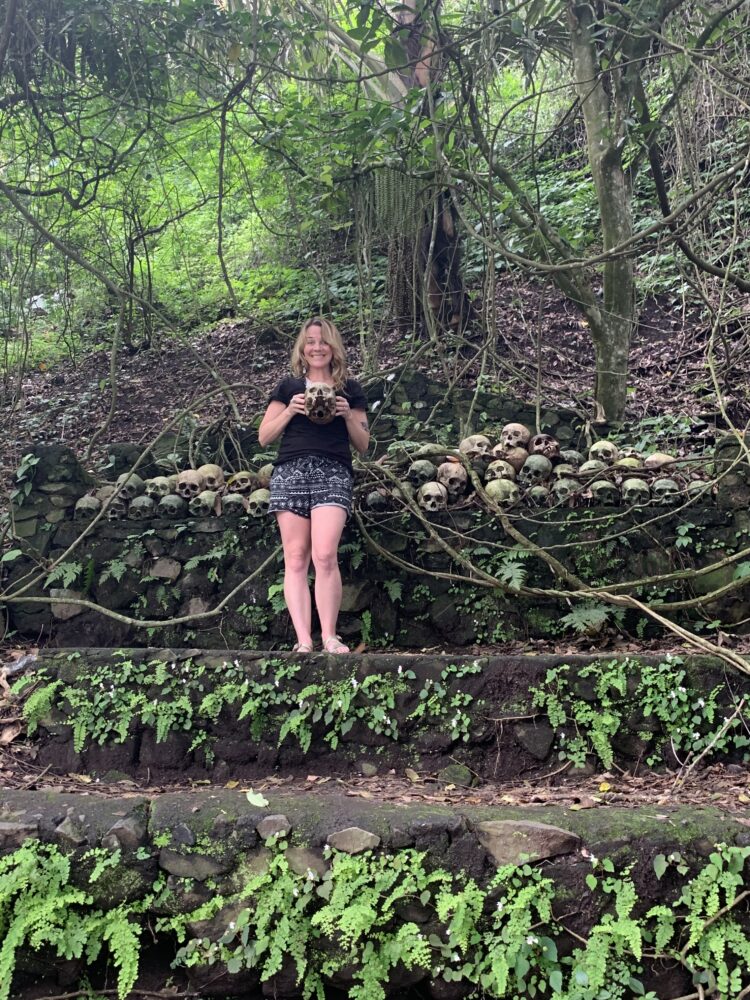 Please enjoy a soundtrack along with your blog post! Piano version of Holy Bones!

It was a long bumpy ride down a new mountain road, just paved in 2017. Prior to that, a person arrived only by boat to Trunyan Village, nestled alongside Mount Batur’s gorgeous emerald-green crater lake. Home to the Bali Aga or mountain people, some of Bali’s oldest people (Trunyan has been known to have been inhabited since 911 CE), this is a step into a Bali from ages past — but not entirely — these folks are still present and moving with the current, alive and well … well, except for the 11 rotating corpses slowly decaying peacefully in nature at the unique cemetery which lured me to this remote village.

Bali is a predominantly Hindu island nestled a little over midway down in the Indonesian archipelago of more than 17,000 islands. It is a different style of Hinduism than that of India, and dare I even scratch the surface should I even attempt to describe the differences. Each village has its own special traditions and customs. Each family compound has their own temple. And cremation rituals are intense, extensive, and expensive. Think of building a giant sarcophagus in the shape of a cow and putting the loved one inside of it to parade down the street with priests and a gang of musicians … Anyway, this particular village does it a bit differently has a very special way to lay their dead to rest. Trunyan’s Bali Aga people are said to practice rituals that predate even the arrival of Hinduism to the island …

As we were driving up, coming upon a village further down the road, me and my friend & guide Ketut came upon a man on a motorbike waiting for us who happens to be his cousin. Unbeknownst to me, Ketut’s village is very close to here (I’m staying at Ketut & Sherry’s awesome B & B for a month in Ubud), and he called his cousin to organize this expedition for me. The cousin led us into town, zooming up the steep single-line passes to make sure it was clear for our vehicle to pass around the mountain curves.

We arrived just up the hill from the temple, beautiful backdrop of the volcano behind it. Then we descended to the boat house / cafe situation where two boatmen awaited us. The internet spoke of exorbitant fees and pestering touts to check this sight out. I experienced none of this, no touts where swarming the boat launch, and had already agreed upon the price before arriving. I personally thought the price was fine for showing me this special place, truly one of a kind on the planet (IDR 630,000 for the boat ride to the grave site / $45.54 USD). I also tipped an extra IDR 100,000 (approx $7). Of course I paid Ketut for spending the whole day taking me out here, too, so it was a little chunk of change, but truly a drop in the bucket to support these cultural experiences & gracious people. I mean, come on. Some people pay like $30/hour to rent a freaking stand up paddleboard on Lake Nokomis. 😉

Climbed in knee deep to a heavy wooden boat with and was given a huge life preserver, made for a very tall man. I didn’t care, the water was so still and serene. Some thick clouds softened the sun on the water. Two boatmen slowly rowed us towards the cemetery.

Upon the entrance to the cemetery is a stone gate with a few skulls resting eerily on either side.

Then on the left after entering the date are two large puppets which Ketut called “Grandmother and Grandfather.”

The tradition with death here in Trunyan is to leave the dead (of natural causes) covered in a sheet with their head out in bamboo tent or teepee-like cages in the open air. There are 11 places for the 11 dead at this site. If someone else dies, they will move the oldest body to make room for the newest one. The skulls and bones are then added to a pile next to the Taru Menyan tree. This has been the way for 1,100 years … or maybe more.

This special cemetery is only for people who have died of natural causes, and from what I understand is only for married people. There are two other cemeteries alongside the lake, tucked in amongst the tropical foliage, one for people who have been in accidents or illness (or unmarried, I guess??), and one for children and babies. Also, when a new body is brought here, women can’t come for fear of angering the volcano. This is also why they do not cremate because there is already plenty of fire! The bodies are left to decompose with the the special helping roles of the wind, animals, birds, and time.

The mystical thing about this cemetery is the giant Taru Menyan tree, or “nice smelling tree” / fragrant / parfume tree. It is believed that due to this special tree, the corpses do not emit a foul smell as they decompose. I can attest that this is true, as there was someone newly laid to rest only two weeks prior and didn’t smell a thing. The tree was absolutely beautiful.

One of the myths about the Taru Menyan is that four brothers from Keraton Surakarta became intoxicated and hypnotized by its scent as it drifted across the sea that they had to sail to find it. Upon arriving, the eldest brother fell in love with the tree’s guardian spirit, married her, and established a kingdom. This king is still honored today as a god, Ratu Sakti Pancering Jagat. He believed that the beautiful scent of this tree may draw others to it, and thus decreed that the villagers must be buried above ground so that their rotting stench would keep away intruders … but the tree would neutralize the scent for those that live there …

I asked time and time again if okay to take pictures and they encouraged me to take some and the local guide from the village even said to pick up a skull!!!! And he then took a ton of photos of me. It’s possible they would like the tourism, as it bolsters the local economy. And I say keep the price as it is to preserve this special place.

Overall, extremely peaceful experience. It felt like these deceased humans had nice, full life cycles and moved on peacefully from here.

Afterwards, we enjoyed Bali Kopi (strong black coffee which they prepare very finely ground and just pour hot water over the grounds), and I’ve been taking it with a bit of sugar. We watched the water and the chickens and the dogs and the village people.

As for me, I’m not sure where my interest in such “morbid” things came from. Spending a tiny bit of time wandering through the cremation ghats in India … hanging out in cemeteries in my youth, collecting bones when I find them while trail running through the forests, happening upon a small grave in the hills in Germany at a teen, obsessions with ghost stories, learning of alternative ways of burial (like the biodegradable burial seed pods that turn your body into a tree … or the Tower of Silence practice of Zoroastrians, leaving their dead to be consumed by birds of prey.

Maybe pondering death and learning about how the dead are honored gives me more motivation to live, adventure, explore. Life is precious and we only have this one incarnation in the form in which we currently inhabit … may you enjoy your body, mind, and soul and honor it, and everyone else. And explore within and without! Big love from Bali, Mary

If you enjoy my songs, stories, and work, I’d be so grateful if you checked out my Patreon to keep it coming!! Sharing video poems for patrons, and so many more little gifts. patreon.com/marybue Thanks so much for checking it out!