Re-post: Hanging out with Amanda Palmer’s “The Art of Asking” 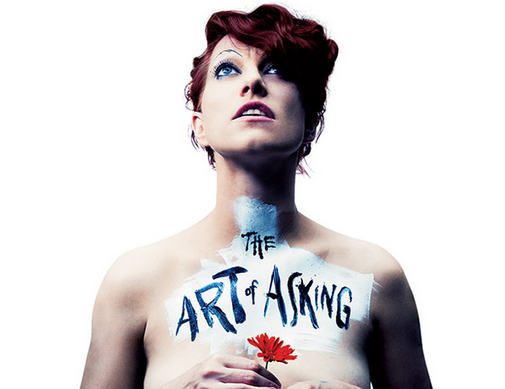 **Originally posted in January 2015.  Amanda Palmer was just in Minneapolis for a solo show last night and I SO hoped to go but was teaching,  and also turned down a gig of my own … ah LIFE!  I support her art & writing on Patreon — she is an inspiring, motivated,  STRONG woman.  We need those!  I just started re-reading her book “The Art of Asking” this week AND I’ve launched another crowdfunding project for my new EP “The Majesty of Beasts”,  so I’m getting back in the spirit of “asking.”  Here’s the re-posted blog!  THANK YOU FOR READING!

Amanda Palmer is a force to be reckoned with.  I first learned of her wily charms from her duo The Dresden Dolls and from afar have followed her marriage to the rad author Neil Gaiman,  her solo career on the ukelele,  her SMASHING Kickstarter success of over 1.2 million dollars and her celebrated TED talk reflecting on her life as a musician,  artist and live statue called “The 8 foot Bride.”

She released a book last year called “The Art of Asking” and a snippet from its jacket cover says, “Even while Amanda Palmer is both celebrated and attacked for her fearlessness in asking for help,  she finds that there are important things she cannot ask for = as a musician, as a friend and as a wife.  She learns that she is not alone in this,  that so many people are afraid to ask for help,  and it paralyzes their lives and relationships.”

Her life as she tells it (provocatively & with brutal honesty might I add) is a wild unfolding of TRUST in human nature.  This,  after 30 + spins around the earth,  I have found to be very, VERY unusual for most human specimens who are often riddled with doubt,  fear and mistrust of their neighbors.  She has toured around the world asking into the twitter universe about places to crash for the night,  showing up alone at people’s flats/homes/warehouses in the middle of the night,  trusting that they will do no harm.  In fact,  they offer her their own beds,  their most delightful glass of red wine and home cooked brunch the following morning.  She flings herself off stages and into the crowd and trusts that they won’t drop her,  break her,  or the unspeakable.  “I maintain,  couch surfing and crowd surfing are basically the same thing” she says in her Ted Talk, “You’re falling into the audience and you’re trusting each other.”  And later,  in her book she says,

This has not always been peachy.  She maneuvers through mountains and mountains of criticism,  hunger (fans volunteer to feed the band before shows and sometimes don’t show up w/ the goods) and most unfortunately, she lived through sexual assault.  And yet she keeps going.  Her community holds her up,  follows through, bolsters her with supportive tweets,  hugs after shows,  and massive generosity.

She talks in her book about how painful it sometimes is to ask for help.  Even as a performer,  couch/crowd surfer,  radical street artist and Kickstarter phenomenon,  she had serious trouble asking her own husband for help.  “We make countless choices every day whether to ask or turn away from each other”  — she may be speaking to a pervasive loneliness in our social media-crazed culture where we are SO “connected” … but only from our isolated office space,  our smartphone portals,  surrounded by people on the bus in the city but still so alone …

I have so many take-aways from this book … and I must say,  the good-vibe-solidarity w/ this memoir and my deepening love for this incredible artist take the cake.  These good vibes also morph into nebulous, possibly “woo-woo” reactions regarding love and light, karma and giving,  as well as some practical how-to’s to add to the way I live my own life.  I will probably not allow my fans to paint my naked body after shows (let’s just let that be Amanda’s amazing signature!) but to “ask without fear,”  to believe in the value of art for the sake of art (art is WORTH IT!), to build relationships through music that go beyond performer/listener but to see the humanity,  the loneliness,  the pride,  the vulnerability,  the passion whether flaring or dormant, to demand & foster respect and COMPASSION as we walk the streets each day … this is a book about BIG LOVE.  I highly,  highly recommend it. 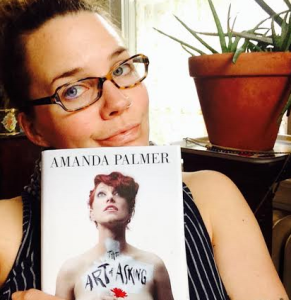 … I have a little bit to ask of you 😉 I am also in the middle of a Kickstarter project!  Please give it a look and any support you can offer is much,  MUCH appreciated!

Kickstarter Campaign for my 6th album “Holy Bones” has launched!