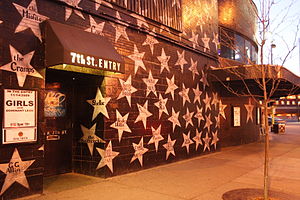 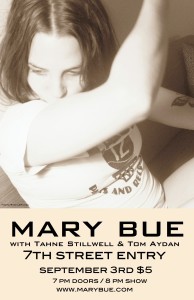 It is with great pleasure that I announce these two exciting performances:  Saturday, August 23rd at the Chaperone Block Party (Duluth) AND Wednesday, September 3rd  at the 7th Street Entry in Minneapolis.

To comment on the latter,  the 7th Street Entry is part of downtown Minneapolis’ premier nightclub First Avenue,  made famous in the 80’s by local MN artist PRINCE who used it for many scenes in his movie “Purple Rain” and would often try out new material.  The 7th Street is a smaller version of the club (capacity 250) and some awesome live recordings have taken place there “including Hüsker Dü‘s first album, Land Speed Record; the song, “Cables,” on Big Black‘s Atomizer album; Rifle Sport‘s live album, Live at the Entry, Dead at the Exit; and Motion City Soundtrack‘s, Commit This to Memory live DVD,”  according to Wikipedia.

Coming up even quicker is the Chaperone Records’ Block Rockin’ B-day Bash this coming Saturday, August 23rd.  I get to kick off the party at 3 pm on the outdoor Bent Paddle Stage.  The party is taking place outside of the new Red Herring Lounge in downtown Duluth.  It’s free from 3 – 6 pm and then $8/$12 depending on if you wanna stay for the after party (you probably do).  Both Chaperone Records and The Red Herring have taken Duluth by storm in the last year – definitely worth celebrating in our community.  Hopefully see you at one or both of these events.  XO, Mary 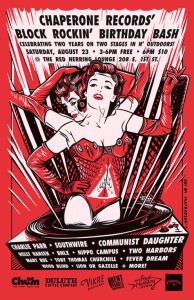